In 1998 Ross Bennett set up the Australian Reptile Centre Canberra at Gold Creek, a popular attraction for locals and tourists.

It was his dream come true — to surround himself with reptiles and share his extensive knowledge of native plants and animals. His life purpose was to educate, and he worked tirelessly to dispel people’s fears of reptiles.

His thirst for knowledge and his passion for sharing it will be sorely missed. He also held a deep respect for First Nations people and their culture.

His passion for Australian flora and fauna grew from childhood, a love fostered by his high school teachers at Box Hill, Melbourne.

From an early age Ross spent his weekends searching for creatures in the local creeks and bushland.

As a teenager, he collected lizards and snakes and kept them in the backyard of his family home. He also kept snakes and a small crocodile in his bedroom. One night, Ross was bitten by his tiger snake. Fortunately, he received quick treatment in hospital and his father smoked out the snake from behind a wardrobe.

At 19, Ross became a ranger with Parks Victoria at Wilsons Promontory. As a regular visitor there, looking for reptiles, he had met a ranger who saw his potential and gave him the job.

Becoming well respected as a reptile expert, Ross started a herpetological group and undertook annual counts of tiger snakes at Rowes Lagoon near Goulburn. He also gave presentations to organisations, schools and community groups, and even milked snakes for anti-venom. In 1997, he published a book “Reptiles and frogs of the Australian Capital Territory”, the culmination of years of research. 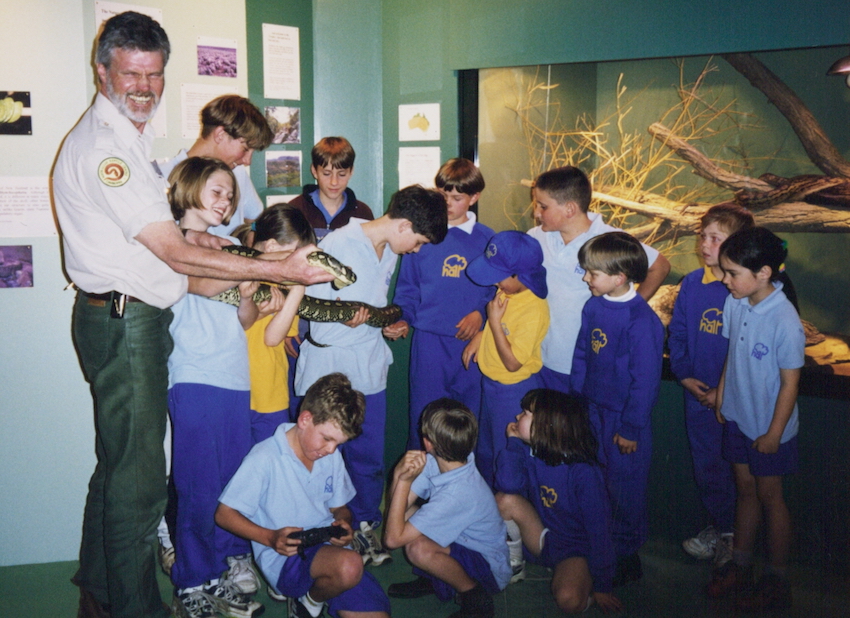 Ross Bennett delighted in sharing his knowledge of reptiles with others. Photo: Supplied by family.

The 2003 Canberra bushfires threatened Ross’ home “Arawang”, in Kambah. He used his ranger experience and fire training skills to save the house but lost his sheds. He was found collapsed lying face down with his knapsack still on his back, suffering exhaustion and smoke inhalation. Needing emergency treatment, he spent four days in intensive care.

Arawang was Ross’ home for 47 years. A former pastoral property then ranger’s residence, Ross planted trees and created natural habitat for native birds and animals. He loved his home.

Ross’ knowledge was vast. When his brother Peter and sister-in-law Diana were visiting from England, Ross suggested they visit Hartley in the Blue Mountains. As they walked into the old courthouse there, they disturbed a lizard by the drain. In Canberra, when they told Ross about their visit, he asked if they saw the lizard in the drain. “Do you know where every lizard in NSW lives?” Peter asked.

Ross met his partner Meg Doepel, also a ranger, in the parks service. Their daughter Hazel has also become a ranger.

“Dad was quite an admirer of Banjo Paterson’s poems and was able to recite any of his poems without missing a word. One in particular was ‘Clancy of the Overflow’. I think this story resonated with dad, as a man who managed to avoid a desk job, who would rather be out in nature, whether that was tailing a mob, taking in the scenery or walking for tiger snakes at Rowes Lagoon,” Hazel Bennett said at the memorial service.

Ross was scrupulously honest, generous, and always saw the good in people. He would proudly gift those around him with his free-range eggs, even if it meant the family had to buy theirs from the supermarket!

His wish to ease people’s fear of snakes and his founding of the Australian Reptile Centre Canberra are testament to his passion for wildlife, especially reptiles.

Ross Edward Bennett was born on 7 July 1952 in Box Hill, Melbourne. He was the fourth of six sons of Hilda Jean and Ken Bennett.

Before Reptilia can show exotic reptiles in London, here’s what city staff say the zoo must do